I’m going to rave a little about the first few minutes of “Good For Laughs” before I talk about Frank Gorshin. I don’t often write about production values and film techniques but what the team is doing in this, Movin’ On’s 10th episode is too good not to give props to Director, Sutton Roley, Director of Photography, Ted Landon, Location Manager, Tony Brown, and Composer, Nelson Riddle.

To begin, how about that opening shot? What at first looks to be a really nice driving POV (point of view) crossing a bridge over the Columbia River suddenly pans right to reveal a splendid view across the river. The pan continues, through a full 180 degrees and finally comes to rest on a close shot of Sonny, through the Kenworth windshield, driving and checking his watch. After cutting back to the original angle of the POV another cool shot follows. It’s a low angle close up through the windshield of Sonny with reflections of road signs flashing across his face on the glass. Then we launch into a mini chase scene with a speeding taxi and up-tempo music to match. Over the next few shots the taxi catches the Kenworth. Will pops out and jumps into the cab. During the chase, in the far background we can just make out a huge, snow capped mountain down the road. With Sonny and Will reunited and arguing as they roll down the lonely road, the magnificent, distant mountain becomes more and more prominent until Mount Hood finally dominates the landscape.

The rest of the episode is very good too. Frank Gorshin gives a wonderful performance as a Vietnam Vet coming unhinged. He’s especially good at the climax of the episode, where Riddle’s music again sets the mood perfectly as Gorshin’s character slips from his painful reality into a happier fantasy.

“Good For Laughs” is anything but! The episode could have been less ironically titled, “The Ties That Bind”. Frank (The Riddler) Gorshin plays Will Chandler’s Vietnam War buddy. As with any wartime friendship there’s an unbreakable bond between them, a tie that binds one to the other in ways that cannot be explained to anyone who has not experienced it. Our writer, Mann Rubin, having been in the military, understood that kind of friendship and imparted a quiet, empathic knowing to our characters.

The magnificent location of Hood River, Oregon is beautifully photographed in this tense, off center look at a lumber town filled with folks whose livelihood is the mill. In a scene with high stepping square dancing to violins, guitars, and mouth harp, we get the feel of small town living and loving. I remember asking Producer Joe Gantman to “open the lens” on these spectacular backdrops and he conveyed that perfectly to Director Sutton Roley. You’ll even take pleasure in seeing the camera placed high up…. overlooking our truck barreling down the road with Mt. Hood firmly in the background. Beautiful stuff.

The frenetic action of the lumber mill comes at a fast pace. All kinds of odd looking lumber vehicles zoom around the real, working Hanel Lumber Company location where Sonny and Will are preparing to haul away a load of logs until Gorshin’s rig is crushed in the neatest timber crashing stunt ever broadcast on network television.

Then there’s a terrific scene, played in a master-shot, not the conventional close-ups, where Will, seeking Sonny’s help tries to explain his pal Tucker’s problems. Even at a distance, the dialogue is crisp, and we know exactly what the actors are expressing…. allowing us to see, with a wide lens, all the activity around them. Tucker’s story; divorce, cheating partner, lost money, bears a striking similarity to Sonny’s old woes. Will knows it and plays it for all it’s worth. Will knows his partner’s got a good heart so naturally the ploy works. Sonny is in! 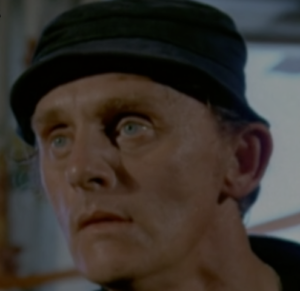 Frank Gorshin as Tucker J. Paulson in “Good For Laughs”

Frank Gorshin is superb as Will’s very troubled Vietnam buddy whose problems run deep. His divorce has propelled his pre-existing paranoia over the top. Gorshin was not only a wonderful dramatic actor but also a very funny comedian. His uncanny imitations of Kirk Douglas, Burt Lancaster, and Marlon Brando kept everyone on the set in stitches. He often changed his voice during a take, driving the soundman crazy and making Claude and Frank belly laugh with tears flowing.

You’ll also recognize the former child actor, now adult, Skippy Homeier. Sutton Roley recommended him, as they had worked together on the TV series “Combat”. However, the actor whose presence will most tickle you is Jonathan Goldsmith (credited as Jonathan Lippe) playing Sheriff Terry.

“What’s so special about him?” you may ask.

Well, if you didn’t recognize him immediately, look again – he’s the “Most Interesting Man In The World”, immortalized in Dos Equis many, many commercials, and photo ads. 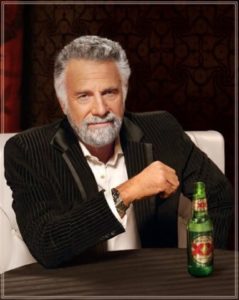 All that said… Our three stars look great in this very touching episode. Have a look and let me know what you think….