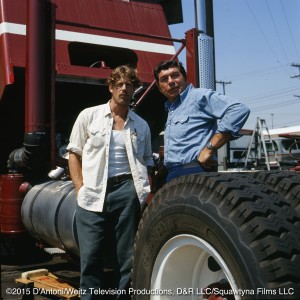 Movin’ On is a television series staring Claude Akins and Frank Converse that ran on NBC from 1974-1976. Akins portrays independent truck driver Sonny Pruitt, and Frank Converse, his college-educated co-driver, Will Chandler. Hard working entrepreneurs in a Big-Rig, the pair roams the country, hauling loads and helping folks they meet each week on the road.

Philip D’Antoni, creator and executive producer of the series, and his partner, Barry Weitz, are also the people behind this website. Additionally, there’s me, Mark Rathaus. Phil and Barry are responsible for creating and producing Movin’ On. I am responsible for reviving it. Movin’ On ran two seasons on NBC after a successful airing of In Tandem, a Movie Of The Week and the pilot for the series. With 44 episodes, Movin’ On didn’t qualify for traditional syndication. When Phil mentioned that he and Barry owned the series, I naturally asked, “Have you tried selling it?” The answer was no.

I tracked down the original film materials to a vault in Kansas and had them delivered to me in Los Angeles. Their condition was what you would expect after their long, long rest. With help from The Peter Rodgers Organization and an LA post- production facility, we re-mastered picture and sound to modern digital standards.

Movin’ On re-debuted on cable television in 2011 and now streams on Amazon Prime, Youtube, and PROClassicTV.

I discovered that there are many fans of Movin’ On that never gave up hope that their show would rise again. The show is important to them. They have special memories of watching the programs with family, and, as many of them are truckers and children of truckers, they take pride in and identify with the characters of Sonny and Will. Many have said Movin’ On is the reason they became truckers. These fans continue to share memories of the show online (and of the green Kenworth W-925 VIT with its distinctive “arrow” logos) and clamor for reruns and a new version of the series.

Some say Movin’ On fueled, or even started, the CB radio craze of the 70s. During the series, truck drivers on the CB would say that they were going to “Do it like Pruitt.” After the series ended, the phrase became “Do it like Pruitt used to do it.” This phrase can still be heard 40 years later, often spoken by drivers too young to understand the reference.

Movin’ On was filmed on locations all over the United States, up and down both coasts, a very unusual style for the period. Akins and Converse actually drove the trucks during filming, having been trained and obtaining their commercial driver’s licenses prior to making the pilot episode.

Sonny and Will, played by Claude Akins and Frank Converse, are the modern equivalents of cowboys. They roam America minding their own business. They don’t seek trouble, but when they see a wrong, they can’t help but try to right it. Being heroes, they side with the little guy: the friend who has gotten himself in a scrape, a fetching woman in need, or a down-and-out soul they never laid eyes on before doing battle with forces bigger than himself. Sometimes Sonny and Will wind up on different sides. After all, there are situations in life where both sides are justifiable and all that’s needed to resolve the confrontation is a dash of common sense, understanding, and insight provided by a pair of wandering strangers.

This website hopes to satisfy the fans who remember the show, who want to see photographs from our library, to hear stories from the producers, actors, and crew, and to see newly taped interviews which we are in the process of filming. Ultimately, we also want to keep growing the fan base. Movin’ On appeals to new viewers for its honesty about people and mid-seventies issues that still resonate in America today. There is still a need for heroes and these two truckers fit the bill nicely.

Please explore the site and send us your feedback. The site is for you, the fans. 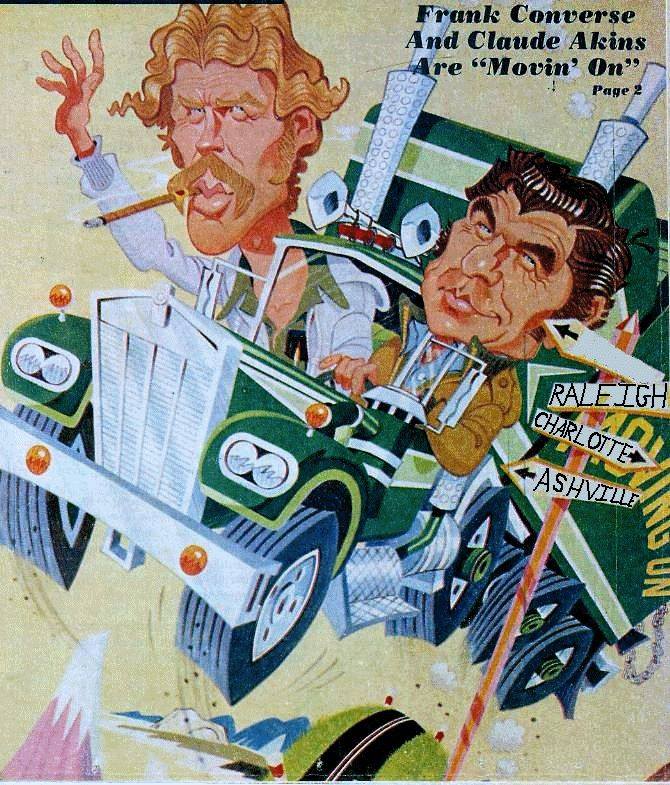 Be first to hear all the Movin' On news!
We promise never to share you email address with anyone!

Be first to hear all the Movin' On news!
We promise never to share you email address with anyone!