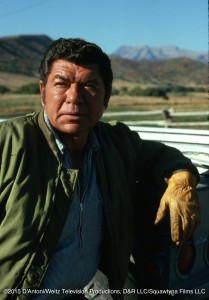 Broad-shouldered and beefy, Claude Akins had wavy black hair, a deep booming voice and was equally adept at playing sneering cowardly villains or hard-nosed cops. The son of a police officer, Akins appeared in nearly 100 films and 180+ TV episodes in a career spanning over 40 years. He attended Northwestern University and served with the US Army Signal Corps in World War II. He first appeared in front of the camera in From Here to Eternity (1953). He quickly began notching up roles in such TV shows as Dragnet (1951), My Friend Flicka (1955) and Gunsmoke (1955). He turned in several strong cinematic performances, such as gunfighter Joe Burdette in the western Rio Bravo (1959), Mack in The Defiant Ones (1958) and Earl Sylvester in The Killers (1964). Akins, played war-mongering Gen. Aldo in Battle for the Planet of the Apes (1973), unrecognizable underneath his simian make-up.

In Movin’ On (1974-1976), Akins stars as old-time, independent “big-rig” truck driver Sonny Pruitt. The series was likened to Route 66. Episodes usually centered around Sonny and Will, played by Frank Converse, always traveling and becoming involved in the lives of people they met wherever they found themselves. Movin’ On was filmed on location all over the United States.

Akins continued starring in films and TV right up until the time of his death from cancer in 1994. By all reports he was a gregarious, likable and friendly person off screen. 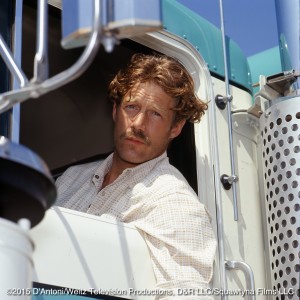 Frank Converse as Will Chandler

A firm-jawed, sandy-haired player of 60s and 70s primetime TV, Converse could have been one of those handsome, tough-guy figures that fall by the wayside after the demise of their famous series. Instead, as a stage-trained actor, he persevered as a respected, all-purpose character actor, crafting a career that has now passed its fourth decade.

Converse was born on May 2, 1938 in St. Louis, Missouri and earned a BFA in drama in 1962 at the Carnegie Institute of Technology. In the 1960s he built up his Shakespearean resume with roles in King Lear,  Hamlet, A Comedy of Errors, Richard III, Henry V and Much Ado About Nothing.

1967 was a banner year for Converse. He appeared in the films Hour of the Gun as Virgil Earp, and Hurry Sundown, but he earned surprise stardom in his first TV vehicle Coronet Blue. In this short-lived series, filmed in 1965 but televised as a summer replacement in 1967, Converse played mysterious Michael Alden, who is roughed up and dumped into New York harbor by would-be assassins. Left for dead and having lost his memory, the only key to his past are the code words Coronet Blue. Although audiences never found out what those words meant, they now knew the name Frank Converse.

Next Converse appeared with co-stars Jack Warden and Robert Hooks as three plainclothes detectives in the police drama N.Y.P.D. (1967). His third major series co-starred burly actor Claude Akins in the big-rig action-adventure Movin’ On (1974). Converse, playing Will Chandler, represented the 70s youth culture, idealistic, fair-minded, and socially aware. The pairing with Akins’ gruff but lovable older trucker, allowed the two actors to play off each other in a way that portrayed both their humanity. In all three series, Converse owned a quiet, reserved, somewhat detached quality that invited “mystery man” appeal.

Converse continued to return to his theater roots, appearing in John Guare’s black comedy, The House of Blue Leaves (1971), The Seagull (1973) and Hobson’s Choice (1977) as well as on Broadway in The Philadelphia Story (1980), Streetcar Named Desire (1988) and Design for Living (1984). Other productions around the country included The Crucible, Death of a Salesman, A Man for All Seasons, Two for the Seesaw and even the musical South Pacific.

Continuing to work in television, Converse showed up on a number of daytime soaps, One Life to Live, As the World Turns, and All My Children.

Facts about “The Big Green Truck” are a little harder to come by than are those of the two human co-stars. Based on best available knowledge it is believed the tractor featured in the pilot episode, In Tandem, was a dark green 1973 Kenworth W-925, single stack, single breather, square bumper with painted steel rear wheels. It sported a full length arrow-stripe and a smaller arrow on the 36″ sleeper. For the series the production changed to a 1974 Kenworth W-925 with the VIT (Very Important Truck) package and walk-in bunk. This truck was the same dark green, but the arrow stripe did not continue on to the cab and doors. “S.Pruitt” was displayed near the top of both doors. The 1974 truck had large tanks, twin breathers, twin stacks, gull-wing bumper, polished wheels all around and was custom made by Kenworth. Two trucks were used each season, and according to Nick Gantman, former Production Assistant for D’Antoni/Weitz Television Productions, one truck was always “at the ready” for filming.

Some think the truck was changed again for Season Two, to a 1975 model, but the shows Executive Producer, Barry Weitz, says not. Despite Mr. Weitz’s denial, many fans have examined photos from the second season and claim the trucks are definitely 75s.

One thing is certain however: Movin’ On was filmed on locations all over the United States. Season One on the West Coast and Season Two on the East Coast. All the Kenworths, considered co-stars of the show along with Akins and Converse, did their share of hauling between locations. 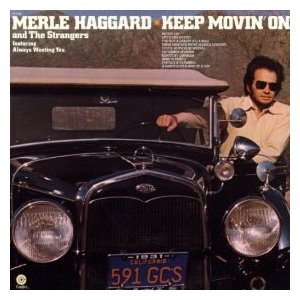 Merle Ronald Haggard is an American country and Western songwriter, singer, guitarist and fiddler. Haggard and his band, The Strangers, helped create the Bakersfield sound, characterized by the unique twang of Fender Telecaster, traditional country steel guitar, new vocal harmony styles in which words are minimal, and a rough edge not heard on the more polished Nashville recordings of the same era.

By the 1970s, Haggard was aligned with the growing outlaw country movement and has continued to release successful albums through the 1990s and into the 2000s. In 1994, he was inducted into the Country Music Hall of Fame.

In 1975, Haggard agreed to write and record the Movin’ On theme song during a bass fishing excursion with Executive Producer, Barry Weitz. “Movin’ On” became Haggard’s twenty-first number one country hit. 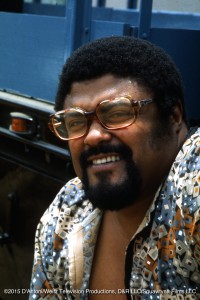 Roosevelt “Rosey” Grier is an actor, singer, Christian minister, and former professional football player. Grier was a member of the New York Giants and starred in the Fearsome Foursome of the Los Angeles Rams. He played in the Pro Bowl twice.

After Grier’s professional sports career he worked as a bodyguard for Robert Kennedy during the 1968 presidential campaign and was guarding the senator’s wife, Ethel, when Kennedy was killed. Although unable to prevent that killing, Grier took control of the gun and subdued the assassin.

Grier hosted his own television show and made approximately 70 guest appearances on various shows during the 1960s and 1970s. His reoccurring role as Benjy in Movin’ On nearly snagged him a spin-off series c0-lead with Art Metrano, but after Movin’ On was cancelled in 1976, the spin-off never happened. Grier became an ordained Christian minister in 1983 and travels as an inspirational speaker. He founded American Neighborhood Enterprises, a nonprofit organization that serves inner city youth. 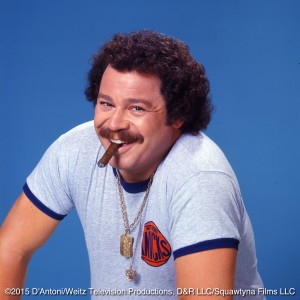 Arthur “Art” Metrano is an actor and comedian born in Brooklyn, New York. Metrano’s first film role was as a truck driver in the 1961 Cold War thriller Rocket Attack U.S.A.. Among Metrano’s TV appearances were a 1968 episode of Ironside, a 1969 episode of Bewitched, and as a regular on The Streets of San Francisco.

On film Metrano may be best known for his role as Lt./Capt./Cmdt. Mauser in Police Academy 2 and 3. But on television, Metrano is well remembered for his reoccurring role as Moose, comic nemesis of Sonny and Will in the second season of Movin’ On.

Metrano is also known for his frequent appearances on talk and variety shows in the early 1970s, especially The Tonight Show, as a “magician” performing absurd tricks, such as making his fingers “jump” from one hand to another, while constantly humming an inane theme song – “Fine and Dandy”, an early 1930s composition by Kay Swift.

In December 2007, Metrano filed a lawsuit against the creator, producers and studio behind the television show Family Guy, asserting copyright infringement, and asking for damages in excess of two million dollars. The case was settled out of court in 2010 with undisclosed terms.

Metrano seriously injured his spinal cord due to a fall at home in 1989 and temporarily became a quadriplegic. At times he tours with his one-man show, “Jews Don’t Belong On Ladders…An Accidental Comedy”, which has raised more than $75,000 for Project Support for Spinal Cord Injury, to help buy crutches, wheelchairs, and supplies for disabled people.

Barry Weitz was born in December 1940, in New York City. After graduating from New York University, he enlisted in the Army and was stationed at Ft. Dix, New Jersey and Ft. Sill, Oklahoma. After military service, Barry found employment at William Morris, a theatrical talent agency in New York.

At William Morris, Barry first worked booking musical acts around the country, and then transferred to the Motion Picture Department in Los Angeles where he packaged films such as Love Story and the Green Berets. Weitz also represented writers, directors, producers, and actors. Weitz represented Phil D’Antoni and was part of the team that put together the Academy Award winning film The French Connection. D’Antoni and Weitz formed a partnership when Barry left the agency.

As D’Antoni/Weitz, they produced the police drama The Seven-Ups and several TV pilots. In 1974 Weitz created the pilot In Tandem, on which he and D’Antoni served as Executive Producers. In Tandem became the successful series Movin’ On, starring Claude Akins and Frank Converse as independent truckers, modern day cowboys roaming America trying to earn enough money to keep their rig while managing to help the people they found in trouble every week.

After Movin’ On concluded its run, Weitz went off on his own to write and produce more than 30 Movies Of The Week, pilots, and TV series. His career allowed him to work with some of the finest writers, directors and actors in Hollywood. Weitz continues to produce, lecture, and teach creative writing at Universities throughout the country. 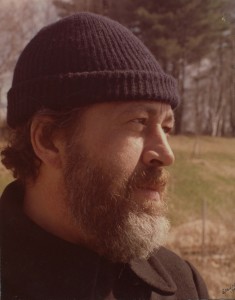 Philip D’Antoni was born in New York City in 1929. He is best known as the producer of the films Bullitt and The French Connection and as producer/director of The Seven-Ups.

After serving in the Army during the occupation of Japan, D’Antoni worked selling advertising for Mutual Broadcasting in New York. Soon he began producing television specials featuring star performers touring their birth places: Elizabeth Taylor in London, Sophia Loren in Rome and Melina Mercouri in Greece.

In 1973 D’Antoni and partner, Barry Weitz, turned their attention to television production. In only three years they produced six Movies Of The Week and the NBC series Movin’ On.