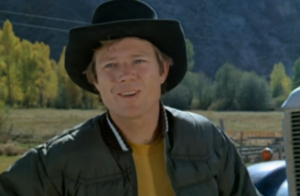 Wouldn’t it be wonderful if life’s problems could be solved with a simple game? If people with opposing viewpoints could, say, play a game of football to decide who was right? Sadly, even on television that is not likely. But of course, those of stout body and mind, with justice on their side, will triumph over the bad guys despite scoring fewer points on the field of honor – so long as they score the most points in the minds of the righteous!

Thus “Games” is a parable. In real life, even the worst, speed-trap-obsessed cop, with an ax to grind against truckers, would never randomly erect township boundary signs to induce truckers to break traffic laws. And only in a television drama would this bad cop’s girlfriend be the local judge so that none of his bogus traffic citations are questioned or reported to state law enforcement agencies. How do men of honor (Sonny & Will) defeat this dastardly person? Football of course!

But football is a game to be played by honorable men. Obviously, this cop (Gary Lockwood) has no honor and would never play fairly. So, I repeat; how do men of honor defeat this corrupt officer of the law? Toss out your honor? Sink to his level? No! Never! To do so might win you the battle but by sacrificing your honor you would surely lose the war. Sonny Pruitt and Will Chandler are heroes. The hero’s journey is difficult and dangerous, but the thing about heroes is that they win. They complete their quest with their honor intact. That is why they are heroes.

On a lighter note, a hero’s journey is enjoyable for those who share it. We Movin’ On fans are lucky. We get to watch our heroes play football; and it’s quite a sight. 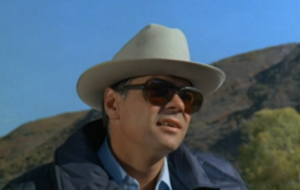 As we’re in the gut of football season, I thought I would have another look at our football episode, “Games”. When you watch “Games”, two things immediately stick out; the great imitation that Michael Parks does of the film icon, James Dean (Rebel Without a Cause, East of Eden, Giant). Carefully watch his performance and note the way Michael chews gum, uses his cowboy hat, swallows his words, acts shy, and stays very self-contained. This was Dean’s acting style, which Michael emulated convincingly in our episode. The other thing that stands out is an editing technique that will please you. Our editors made great use of the “talking truck”. By “talking truck” I mean that Sonny and Will’s dialogue is heard “off camera” while you see the Kenworth motoring across glorious background scenery.  In other episodes, we used this method but “punched in” for some “on camera” coverage of Sonny and Will – less so in this episode.

Michael Parks had starred in the T.V. series “Then Came Bronson” and I remember him looking around our set in wonder, “How do you guys do this every week?”

“Well, Michael, we have the benefit of the finest crew in the U.S. of A…. that’s how.” He laughed, kicked the dirt, chewed gum, walked on…. and continued channeling James Dean.

When we first read the script for “Games”, it occurred to our director, Charlie Dubin, and me that it would be great fun to have a nice guy play the villain. Dubin suggested Gary Lockwood… and he was right on. When Lockwood got the script, he was surprised and quite pleased that we wanted him to perform a bad guy. He leaped at the role! Check out his performance. I’m certain you’ll appreciate his good work as much as I do.

We had the good fortune on Movin’ On to always get a great cast. The scripts were so good that most of the fine actors we offered roles accepted. I’m proud that we were able to give work to some Hollywood stars whose glow had dimmed a little and to many great character actors who still had their chops but were being overlooked for having been around a long time. We also nabbed many young actors on their way up who hit it big not long after appearing on Movin’ On. In “Games” you can witness another of our casting tricks, using professional athletes. The “Games” script called for Sonny and Will to find a third man to join them on the football field against Gary Lockwood and his police teammates. Pro athletes often went into acting so I thought we should try one.

The morning that Joe Kapp came into the office we all were taken with his size.  He was a big man who moved easily and reminded me of a cat searching out prey. I remembered him from his role in the Burt Reynolds’ film The Longest Yard and he told me he had a lot of fun and many laughs with Reynolds. I told him, that when it came to laughs, our guys would keep a smile on his face as well. Of course, his illustrious football career and the Super Bowl, when he quarterbacked the Minnesota Vikings, made up the bulk of our conversation. These were the days that football players were not paid exorbitant amounts of money, and Joe’s love of the game was at the forefront of our meeting.  It’s always great fun to watch an athlete turned actor bring their particular skills to the table.  Joe does it beautifully.  I guess you could say that Joe was cast the moment he walked in the door!!

For further enjoyment, those of you who watch very closely might have fun trying to figure just which rough and tumble football scenes are being played by our “realies”…. and where our stuntmen are filling in?  Enjoy, and let us know what you think. 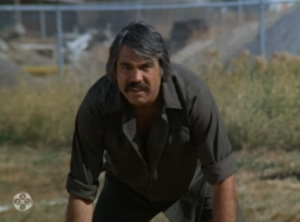