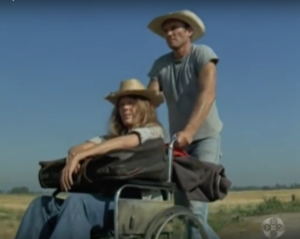 The Simms on the road to Portland

“Grit” may be the most poignant of all Movin’ On episodes. There are no adorable little kids, only a proud, stubborn man so determined to save his wife that he’ll push her from Boise to Portland in a wheelchair and doesn’t care that she calls him “knot-head”. He’s too stubborn, too independent, and too proud to ever be likeable. Even after he learns to accept help from Sonny and Will he doesn’t change much. We’d like to see him transform, be all hugs and smiles and a regular guy, but he cannot make that big a leap. All he can do is shake hands and say a meek thank-you. Perhaps that’s the beauty of the script by William Putman, the direction by Hy Averbach, and the performance by James Olson. 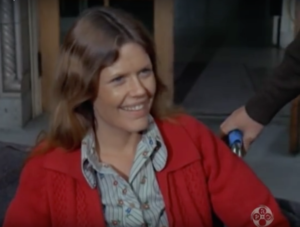 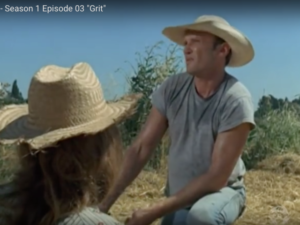 “Grit” could have been titled “What we do for love”. Please enjoy the excellent writing, directing, and acting in this episode.

James Olson and Pamela Payton-Wright play two migrant workers with all the gentle touches that you hopefully have come to expect from all the actors in our series. They are real and subtlety bring their characters to life. James Olsen is exceptional as a husband pushing his ailing wife in a wheelchair from Boise, Idaho to Portland, Oregon. Heart surgery is necessary and the best doctor to do it is in Portland. So, with tons of determination and a “stiff back”, both physically and emotionally, the couple begins their journey.

Sonny and Will meet them on the road and are taken with the “crazy” determination that Olson exhibits and the calm resolve of his very ill wife. This is a wonderful episode dealing with various levels of human emotions and the pulls and tugs of relationships.

Director Hy Averbach does a terrific job spending time with our characters, allowing them to slowly take us deep into William Putman’s teleplay.You’ll recognize James Olson from many TV episodes… and Pamela Payton-Wright had performed in a Robert Blake film I had put together as an agent years prior, titled Corky. I liked her performance then and I was determined to find a part for her in an episode of Movin’ On. You’ll also enjoy seeing William Christopher of M.A.S.H. fame playing a small role.

These complex story lines properly reflect what we hoped for in season one. Enjoy, and let us know what you think. 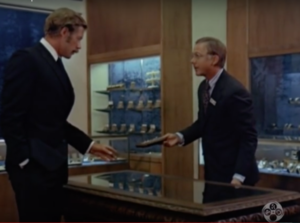