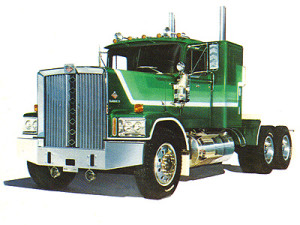 Let’s call “High Roller” a Will Chandler episode. As with most Will episodes, the story revolves around Will’s permanent dilemma. As played by Frank Converse, Will seems a happy-go-lucky guy. He’s fine riding with Sonny and partnering in Sonny’s business. But deep down, Will knows he eventually must get on with his life. That means finding a truck of his own and a woman to share his life.

Rita, played by Cristina Raines, presents herself as the beautiful, charming and willing solution to the second of Will’s needs. Then, she ups the ante by helping him acquire the means to gain his other desire, a handsome new truck. Too good to be true, right? Obviously, there are going to be problems, but nothing Will can’t handle. Did I say how beautiful Rita and the ’74 Diamond Reo tractor are? All Will has to do is break the news to Sonny – and deal with Chuck (Robert F. Lyons) his old friend and Rita’s ex-husband.

Amazen’s Official Historian Group member’s insight is right on. When the story for “High Roller” was originally conceived by our writers it was intended to be “a look in” at relationships at various stages of their development…. the ups and downs that folks go through in different kinds of partnerships. As I had known Sonny & Cher and witnessed aspects of their oft times tumultuous marriage, I may have divulged some of that to the writer, Ken Kolb…. I am not sure. One can certainly see the similar appearance of Christina Raines and Robert Lyons to Sonny & Cher. So, maybe….

But in any event, we did think that Sonny & Will needed to show a side of their personalities that would resonate throughout the series. Will is conflicted as to whether or not to remain the “wing man”…. and almost ditches Sonny for a new truck and a new life. Will is forever questioning, and Sonny is loyal, trusting, and forgiving. The similar parallel exists with Rita and Chuck. She’s ready to move on from her relationship…. to “greener pastures”…. but ultimately “stays at the party with the guy that brung her”.

There are many of life’s parallels in these screen depictions, which further demonstrates what I mentioned in an earlier post. Year one, being a 9 PM time slot, allowed for “more complex” story lines. I am certain that our fans also noted that the director, Leonard Horn, did a beautiful job shooting this episode. Check out some of the camera angles, moving shots, and the exciting truck race. Also consider the way Leonard spends time on Will’s face as he weighs his very important decisions. The same time is spent on Rita as she contemplates her life going forward. An all around, very nice piece of work…. To reprise Sonny & Cher’s song….”I got you Babe”.