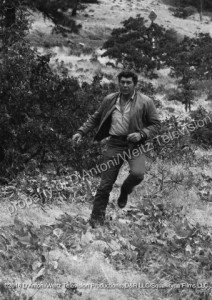 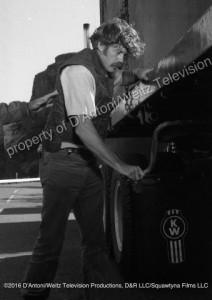 “Lifeline”, an early season one episode is an excellent example of why Movin’ On was such a unique television series:

Now to my thoughts on the story: There are a couple of weak spots among the glorious scenery, excellent acting, and Sonny and Will’s heroics. What’s up with Karen, mother of Mark, a fifteen year old emotionally handicapped boy? When we meet her in the café we assume she’s a single lady because she’s flirting really hard, first with Sonny and then with Will. All the while, Mark is running wild around Shaniko. After Karen runs out on Pruitt and Chandler, we find her wandering a wilderness road in search of a ranger station. When she discovers Mark is on the loose she freaks out. Well, why wasn’t she keeping a closer eye on him? Our boys get to do their hero act, save the day and make a pair of friends. But really, someone should have called Protective Services on this lady!

We were in the offices at the MGM studios in Los Angeles and our producer, Joe Gantman, wondered aloud if our crew, which we thought very highly of, could truly handle filming at any location with only practical sets. We decided to find out. Joe suggested that we come up with a story making use of the magnificent locales of Oregon, where we were scheduled to shoot several episodes. The writers came up with “Lifeline” which would severely test the crew. We believed we were fortunate to have an incredibly skilled production crew that could meet any challenge. Testing them early in the first season was a good idea. They performed far beyond our expectations and we knew that going forward they would be able to handle anything we threw at them.

Most of “Lifeline” was to be shot in remote exteriors so we knew we would have to get lucky. The area where we were planning to shoot has constant winds, which add to the drama but also are a headache for the sound mixer. We knew Larry Hadsell, our brilliant, demanding, and persnickety location mixer would “go nuts” trying to record clean dialogue. As the actors were always on locations, there would be no chance to have them “re-record” their dialogue on a stage and edit it in at some later date (looping). So we would have to live with what we got live out in the forest in the wind. It was perfectly accomplished. Whatever wind noise Larry could not avoid, our equally talented re-recording mixer, Hal Watkins cleaned up. And where Hal couldn’t clean it up, our sound editors added wind to match the location tracks to make every sound-edit seamless.

Almost anywhere you turned the camera, the vistas were spectacular. Our director, John Peyser, certainly took advantage of the magnificence of Oregon. There are so many wide shots! I can imagine how thrilled John was with the opportunity to bring to the Movin’ On audience the stunning backgrounds that our location director had found.

But again challenges abounded. Ever changing light conditions caused by clouds required our camera team to carefully monitor exposure so shots matched and could cut together naturally. Again, our crew was up to the task. The look of “Lifeline” is flawless.

As to our cast: I remember when I saw the first draft of the script. I knew we needed a very versatile actress for the lead. I had known Lois Nettleton from various theatrical performances and asked our casting director to bring her in for a meeting. We were immediately smitten with her vulnerability, and imagined her in close-up as she fears for the life of her son, played by Clint Howard. Clint gives a lovely, dialogue free performance, and it was not hard to guess that he would have a very long successful career. Claude and Frank worked their “buns off” as they chased and climbed the rocky terrain of our beautiful exteriors. Have a look at “Lifeline” and I’m certain you’ll appreciate the beauty of the Northwest as much as we did when we first decided to shoot there.