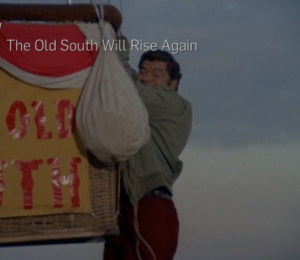 Leave it to Movin’ On to incorporate a real-life event into an episode. And once again, it is writer Jimmy Sangster who has done it! Not only does “The Old South Will Rise Again” document the “Six Flags Over Georgia Balloon Race”, but there’s extensive footage of the Atlanta Six Flags Amusement Park which was the second Six Flags Park and opened in 1967.

“The Old South Will Rise Again” is a fun episode with no real bad guy. The main guest star is Dub Taylor (aka: Cannonball Taylor) as a feisty grandpa whose son is annoyed with him to the same degree that his granddaughter worships him. The old man has his son so frustrated with his reckless endeavors that the son has drawn up papers to have his father declared incompetent. That is the extent of the conflict here; other than the physical danger of piloting a jury-rigged hot air balloon 5000 feet above the ground.

Sonny and Will get involved when the balloon, The Old South, literally falls on their cab on their way to meet a deadline in Memphis. Before that though, we are treated to Claude warbling “Chattanooga Choo Choo”. He knows all the verses and does Glenn Miller proud! 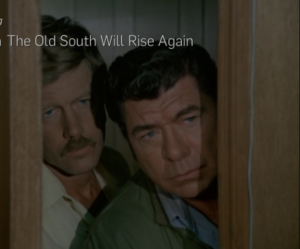 Will and Sonny eavesdropping

Dub Taylor is a veteran actor with a 55-year career and 253 IMDB credits. He appeared in “Mr. Smith Goes To Washington and had recurring TV roles in Roy Rogers, Dennis The Menace, Gunsmoke, and Bonanza. Everyone will recognize him.

Also look for Barry Corbin, uncredited in a small role as Waldo, the greatest of all balloonists, in what may be his first Hollywood role. 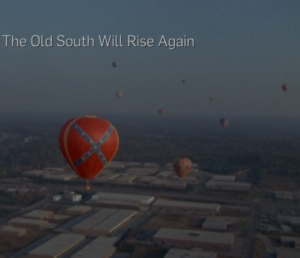 Do yourself a favor and have a look at “The Old South Will Rise Again”. See some wonderful balloon race footage shot at and over the Six Flags Over Georgia Theme Park.

Sometimes, as a film producer, you get the luxury of knowing of an outstanding photogenic event early enough to prepare for it. The balloon race at the park is something, “folks come from near and far” to be a part of. So, with that information in hand, we had a script custom tailored to the excitement. Producer, Ernie Frankel, brought the idea to me in the early stages of our second year and of course I said go ahead. My plan to use extra cameras and crew to capture the magnificent colors and vistas that unfolded on the ground, and in the skies above us. It’s no wonder that our audience always sent letters admiring the scope and energy of our show.

The story is a gentle acknowledgment, and a sweet take on the turmoil associated with getting old. Our lead character, and lovable balloon racer, wants one last chance to win at Six Flags. Note the subtle admonishments from grown children to their older parents to “be careful” as opposed to the thrill of grandchildren that want to be part of the exciting adventures that grandparents still can provide. The interactions with the granddaughter, played by Devon Ericson, are lovely, and you can see the appreciation she feels for her grandfather’s “love of life”…. Good stuff! 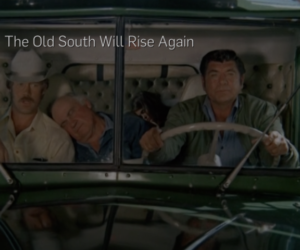 Once the script was in hand, the casting director brought up Dub Taylor, and I immediately said, “Go no further”…. Why, you ask?…. Well, when I was on the set of “Bonnie and Clyde”…. I watched Dub playing Michael J. Pollard’s father. After watching him, I decided if the situation ever presented itself, I wanted to put Dub in something. He has one of the “those faces”…. that worked wonders for @Movin On. You’ll immediately recognize him from a fistful of westerns and many other feature films and TV parts. Dub nails the performance as Luke Hinshaw. It ain’t easy getting old…. and Dub brings that message elegantly, thoughtfully, and with good humor to the screen.

Right off the blocks, you will get the chance to hear Sonny sing “Chattanooga Choo Choo”…. while Will looks on in amazement. Later in the episode, Will tries his hand at singing while square dancin’, pickin’ and grinnin’ is takin’ place. Clearly, it’s not his game…. but Frank has a great sense of humor and plays along. Have a look, and let us know if you agree with Robert Browning, who wrote…. “Grow old along with me, the best is yet to be.” 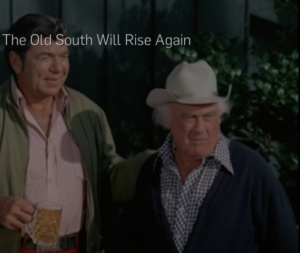 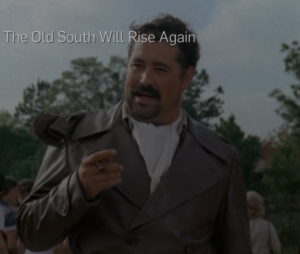