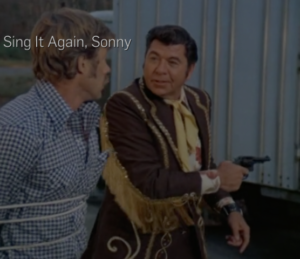 Will Chandler and Sonny Pruitt in “Sing It Again, Sonny”

Claude Akins has a fine singing voice. Not a great voice, just a good one. Good enough for him to think that if he were not a successful actor, he had a shot at becoming a professional Country Western singer. If Claude were a young man today, he might even have made onto The Voice or America’s Got Talent. Who knows, he might even have won a recording contract. What “Sing It Again, Sonny” shows is that it’s dangerous to have some talent. Too little and you are safe, a great amount and you are sure to make it. But, somewhere in the middle you might fool yourself with dreams of stardom. Sonny is lucky Will is around to ground him or he may have gone over the top, thinking that he had a real shot at stardom.

The irony of the episode is that neither Sonny nor the audience will ever know if he has enough talent to make it. At the last minute, Sheila Powers, played by Vera Miles regains her humanity. Sheila lies, saving Sonny from false hopes. Sheila knows that though the Grand Ol Opry wants him, Sonny’s talent is not extraordinary enough and that he will be happier continuing to live his life as a trucker.

Vera Miles is a typical Movin’ On casting coup. Miles had a tremendous career both before and after her “Sing It Again, Sonny” appearance. As a successful studio player she had lead roles in Psycho, The Man Who Shot Liberty Valence, and The Searchers. Her TV credits are astonishing, appearing in everything from Pepsi-Cola Playhouse in 1954 to Murder She Wrote in 1991. In between she had roles in Love Boat, Magnum P.I., Medical Center, Columbo, Marcus Welby, and Bonanza. As a lover of old movies and television, I love how the greats of Hollywood keep showing up as Movin’ On guest stars.

The poet, John Greenleaf Whittier wrote, “Of all sad words of tongue and pen, the saddest are these, ‘It might have been.’ ” Those words must have been buzzing around in Sonny’s mind when he decided to try out for a trucker’s talent show in Nashville. Movin’ On fans will love watching Sonny play guitar and sing, “Rollin’ On.” It’s fun to look at the world of Country Western “wannabes” and the folks that prey on the hopes and dreams of people who just know they are destined be stars. Will knows that Sonny’s chances at stardom are “slim to none”, but he eventually gets on board and carries Sonny’s guitar. 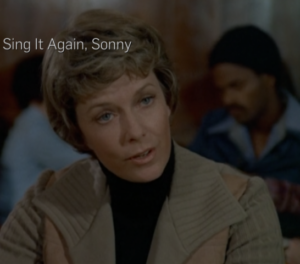 Vera Miles plays a talent agent who tries to get out of trouble with a crooked businessman by convincing Sonny that she believes in his singing talent and that he has a chance to become a star. When Vera came into our offices at MGM we were immediately taken with her beauty and terrific personality. You’ll remember she played Lila Crane, Janet Leigh’s sister, in a terrific role in Alfred Hitchcock’s “Psycho”. Leigh (guest star of Movin’ On episode Wedding Bells) got top billing but Miles was really the co-star with Anthony Perkins. Talking with Miles about her career she said, “When I drove onto the MGM lot for our meeting today, I recalled that I have been dropped by all the best studios in town.” That story endeared her to me and got her cast in “Sing It Again, Sonny” on the spot. Any studio that doesn’t know that they have a star in Vera Miles doesn’t deserve her.

George Lindsey was an old friend of mine. I know you remember him from “The Andy Griffith Show” and then “Mayberry, R.F.D.” I had thought of giving George a continuing role on the series and as this was our last episode of season two, I wanted to see how he got on with Claude and Frank. Well, the three of them got on famously. I couldn’t have asked for better chemistry. Regrettably, there was no season three, so we’ll never know for sure how well George would have worked out. 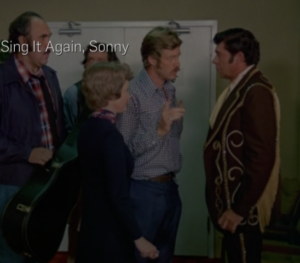 Because Claude did such a great job singing, I had the opportunity to tease Merle Haggard a little. I called Merle and asked him to watch the episode and tell me what he thought of Claude’s singing. After the episode aired, Hag called to say that Claude had a nice voice, “But tell Claude not to give up his day job”. Then Merle added, “Barry, who put that silly costume on him?” I called Claude to tell him what Hag said and we laughed a bunch about his would be singing career and wardrobe choices.

In the last scene of the episode, as Sonny walks onto the stage of the venerable Grand Ole Opry…. with his guitar in hand…. and looks about the darkened venue…. I’m certain he’s thinking, “It might have been…..”

Have a look and enjoy the looseness of our wonderful actors and their ability to have a grand time in a down to earth, self-effacing way. And let us know if you think Claude could have had a singing career.