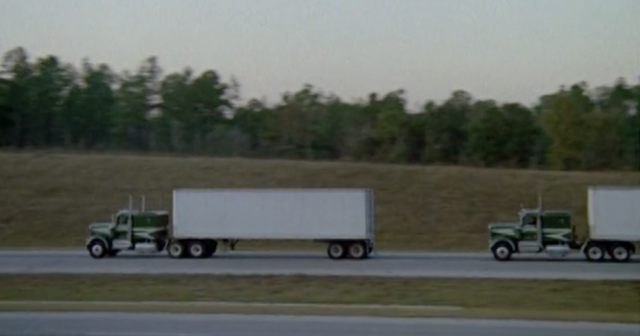 Two Movin’ On Kenworths rolling on!

The Big Switch is a fun episode where Sonny shows off his darker, criminal side and Claude shows off his Bogart impersonation. LQ Jones, a well-travelled television bad-guy, co-guest stars as a mean spirited fence with a health obsession. He runs on a treadmill, rides a stationary bike, and blends protein shakes – all the while cheating and conning Sonny and Will. Jackie Coogan (Uncle Fester) rates a “Special Guest Star” credit and earns it with an energetic portrayal of an electronics retailer doubling as an enthusiastic pop band manager. The music group features enchanting Marguerite DeLain as the lead singer, Wings Howser as the fashionable pop idol guitarist, Scott Arthur Allen as the stoic keyboard player, and Jackie Millines, the happy-go-lucky drummer.

The pop group, named “The Hotshots” are not terrible. They sound like the poor man’s version of The Fifth Dimension (Up, Up And Away). Marguerite DeLain has one Broadway Musical credit so I wonder if she herself sang the song The Hotshots perform. If not, she does a damn good job lip-syncing.

The Big Switch is a special treat because viewers get to see both Movin’ On rigs on screen at the same time. It feels like you’re seeing double as the two identical trucks cruise the roads around Mobile together. 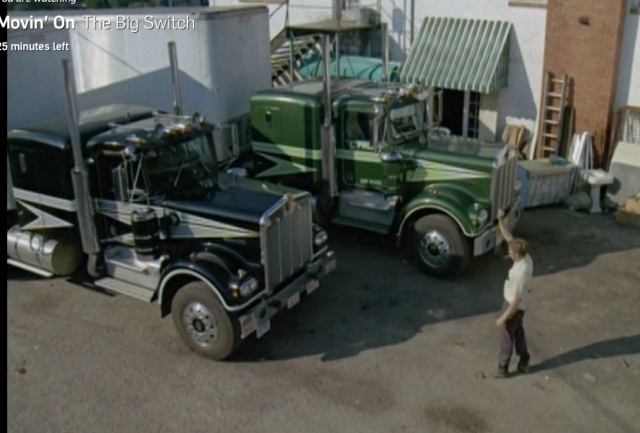 Identical Kenworths. Now for the paint.

So, we had two beautiful identical Kenworths and we were thinking of how we could take advantage of this good fortune. My “go to” writer, Jimmy Sangster, said let’s do a “bait and switch” episode and we’ll use the two trucks to carry the “switched” loads.

“Give me a while and I’ll figure it out,” he answered.

Later that day in walks Jimmy with the idea for “The Big Switch” spilling out of his mouth.

Sangster never failed to deliver, so in about a week he dropped the script on my desk.

The story goes like this: Sonny was cheated by a lowlife, con-man named Flakey Edwards many years ago and now sees the chance to get even. Will understands his drive to even the score and helps Sonny plan and execute the scam to bring down the bad guy.

Casting went so quickly; I can barely remember the meetings pertaining to the two costars. Our casting director, and episode Director, Alan Reisner stopped by my office with huge grins on their faces and said, “Jackie Coogan!”

And I said, “Absolutely!” How could I say anything else? Coogan’s career started in the 1920’s and he was one of the first child stars in history. Come on, we gotta have him in an episode. Reisner also suggested L.Q. Jones, a favorite bad guy from some great westerns.

As we were shooting outside of Mobile, Alabama, near some of my favorite oyster bars, I left for location scouting with a hunger for all you can eat oysters on the half shell and to see our pair of identical trucks in the same frame of film. There was one particular oyster bar that I insisted we shoot at. It’s where Sonny and Will stop and their load is hijacked. We ate there while scouting. I don’t recall if they had the best oysters…. But they did have the best sign: “Oysters – Fried, Stewed, Nude”.

This episode works on many levels…. terrific writing, fine directing, and Claude and Frank continuing to have a great deal of fun with their characters, bouncing lines off one another with a warm familiarity. And please don’t forget the absolutely delectable oysters…. galore!!! 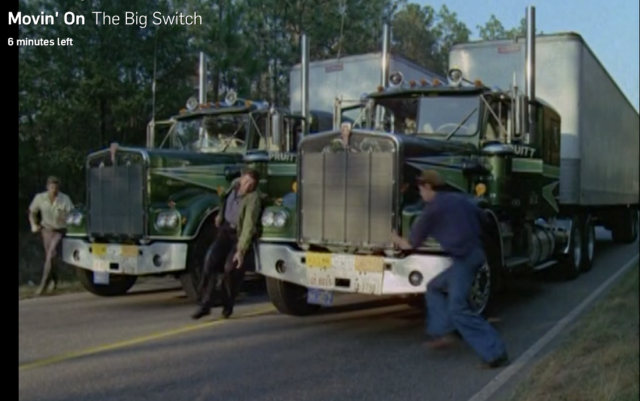