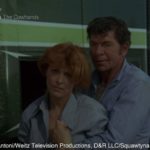 If all you know about Tina Louise is Gilligan’s Island’s Ginger, you might ask yourself, “What is Tina Louise doing in a Movin’ On episode about rodeo?” You might ask yourself, “How is Tina Louise going to ride a horse in that slinky dress?” The answer is, Tina Louise does not ride a horse. She does not ride a bull and she does not rope, rodeo-clown, or shovel manure. The reason Tina’s in a show about rodeo is because Tina Louise is a fine actress. As Helen Trueblood, the ex-wife of an ex-rodeo rider, Tina is soft and hard, sweet and ornery, generous and desperate. It’s easy for a writer to create a character to be a dichotomy as Helen is – but it is not easy for an actress to so flawlessly display those contradictory traits in a one-hour TV drama. Knowing Tina Louise only as Ginger from Gilligan’s Island, I am happily surprised that in “The Cowhands” Tina Louise performs this extraordinary feat extremely well. 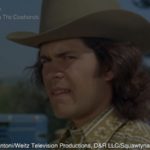 When I look at “Cowhands” I once again realize what an incredible series our company delivered to NBC and to our wonderful viewers. I recall our producer, Joe Gantman, suggesting that we do a “rodeo” episode.

“Joe, rodeo? Really, Joe? That means…. livestock…. and that means only one thing…. Trouble, Joe”

“Right you are…. Sure, but what’s the point of doing this show, if we can’t have some fun and test the limits of our crew’s ability to handle adversity…. Right?”

Joe’s idea of fun began when Eugene Price handed in the script for “The Cowhands”. Paul Stanley was set to direct and we began casting. Someone said, “Tina Louise”. I said, ”You mean, “Ginger?”

Tina came to our offices and was tickled to find a very warm reception from our complete staff. Gilligan’s Island was a favorite of many. We appreciated Tina’s great beauty and terrific personality and I was certain Claude would enjoy his scenes with her. We immediately signed Tina for the female lead, Helen Trueblood.

We next focused on the character of the young rodeo rider, Manolo. I recalled a wonderful John Wayne film and subsequent TV series, The Cowboys and an electrifying new actor, A Martinez, who appeared in both. I knew he would be comfortable around the bulls and horses and bring a sense of reality to the episode. A played the part perfectly, especially the wonderful comic moments in the bubble bath.

Claude called me to suggest his friend, Glen Corbett, for the last major role, Tommy Trueblood, a former rodeo star fighting the impossible battle against time. Glen was a perfect addition to the cast. Glen had replaced George Maharis in Route 66 and we knew Glen would enjoy seeing our team do their stuff. Glen often remarked, “How do you guys do this?”

When I arrived on location, the wrangler greeted me with a saddled horse. Tina Louise was mounted and ready to ride. The wrangle pointed toward the horizon and said, “The set’s that-a-way. Tina knows the way.” Tina and I had a lovely ride and plenty of time to talk “show biz”. And Tina kidded me about my New York accent. Finally, after riding across the scrub, we arrived at the set to lots of “whoopin’ and hollerin'” from the crew.

When you watch the episode, you’ll see a scene where the livestock escape and take off across a field and Sonny and Will have to wrangle them. Well the brahma bull that Will goes after turned on Frank and chased him around till one of our crew was able to get a rope on him. Frank was scared…. so were we.  The “old flame” scenes with Claude and Tina are perfect and you can sense the heat between them…. Once again…. Good work, all around.