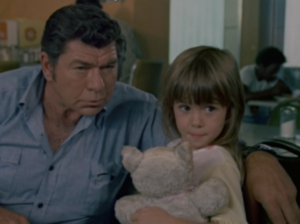 The little girl who plays Charlie is not only adorable but is also a mighty good actor. She steals every scene she’s in and I think all the adults working with her know it. Claude and Frank hold their own but it’s really no contest. I could watch that little girl all day. It’s obvious that the little girl who played Charlie could have had a great acting career. But she’s un-credited in “Will The Last Trucker Leaving Charlotte, Please Turn Out The Lights”. I can’t look up her credits. Is it possible that this brilliant little girl was a local? That she did not continue acting? If anyone can identify her, please let me know. I am so curious who she is!

Another highlight of this episode is the character, Henny, another un-credited actor. Henny is what we often call “a pistol”. One of my all-time favorite Movin’ On lines of dialogue is delivered by Henny, describing Will, then Sonny. “You’re kind of cute in an arrogant sort of way,” and according to Henny, Sonny is “some kind of a bull.” What makes Henny “a pistol” is that she says this right to their face!

Even the bad guy, Ederly, though clearly a lightweight and easily dispatched by our heroes of the highway, is nicely portrayed. Add in the fun character with the fantastic name, Tombstone, and we have a very nicely acted episode where none of the actors, outside the stars, are credited. Sonny claims that Charlotte has, “Plenty of textile mills and pretty gals.” “Will The Last Trucker Leaving Charlotte, Please Turn Out The Lights” convinces me that Charlotte also has a mighty fine local acting community! 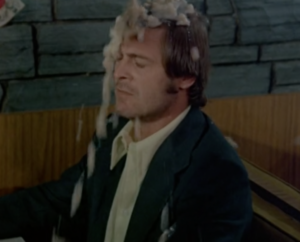 When I looked at “Will The Last Trucker Leaving Charlotte, Please Turn Out The Lights” again after all these years, I wondered why we made this episode. Then I recall that our executive at NBC asked me if we could deliver a “tender, sweet, sensitive” episode that would show the “soft underbelly” of our rough and tumble heroes. Of course I said, “Of course” and we proceeded to lay out this rather soft, aspirational, uplifting piece.

When you watch the episode, pay particular attention to the dialogue between Sonny and Will, especially when Sonny states how cool Charlotte is, “Plenty of textile mills and pretty gals.” Our guys are looking forward to picking up a load, making a couple of bucks and having a good time. When the pretty girl shows up, she’s a beautiful little four-year old that’s been separated from her trucker father. Sonny and Will turn nursemaids and care for the lil’ sweetie-pie…. making sure she’s fed, has a change of clothes, takes her required naps, and then finally, gets her wish… a sweet little kitty. All the while the boys have to fend off the arm-twisting, pressure of an evil freight broker.

Will and Sonny rally all the truckers hanging out at the truck stop and together stand up to the bullying tactics of the thugs. Once again, I’m sure you’ll take pleasure in watching Claude and Frank… both wonderful actors… as their sensitivity comes through and they allow themselves to be affected by the pretty lil’ darlin’. The last shot of the episode, Sonny and Will talking with the lil sweetie on the CB brings a tear to their eyes!!!

As I recently lived in Charlotte, It’s especially fun for me to see what the Uptown cityscape looked like 40 years ago. And… I can personally attest to the fact that “there are pretty girls in Charlotte”…. as I married one!!

I’ve mentioned this before, but “Will The Last Trucker Leaving Charlotte, Please Turn Out The Lights” is another example of how the tone of our show changed from year one to year two. Despite the softening of Movin’ On in season two, I know you’ll agree that we succeeded in both time slots.

Watch Will The Last Trucker Leaving Charlotte, Please Turn Out The Lights