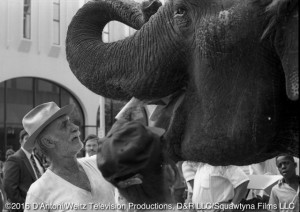 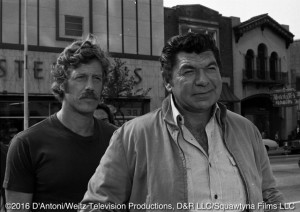 If Anna Mae the elephant is not the best elephant actor to ever work in movies or television, I don’t know who is. The elephant in Dumbo Drop doesn’t hold a candle to Anna Mae. Anna Mae is the star of this episode but she gets strong support from the well known actor Keenan Wynn, whose given name, Francis Xavier Aloysius James Jeremiah Keenan Wynn, is as weighty as Anna Mae. In one scene Anna Mae rampages through downtown Charlotte NC. Anyone familiar with modern Charlotte should check this out and see what the city looked like 40 years ago. I imagine it’s a little different.

When our writing staff suggested we do an episode about an elephant my response was…. “Are you kidding me?”…. No way…. Think of something else…. Please!”

I recalled the director of our pilot, Bernie Kowalski, telling me, “Barry, you can’t direct livestock.” So, off the writers went to come up with another, better idea. Finally, after a couple of further meetings, I was prevailed upon to…. at least give the writer, Stan Cherry, an opportunity to write the script and see how it turned out. If it didn’t work, we would do something else in its place. “OK, OK, since you’re so insistent, let’s give it a try.”

Well, Stan wrote a wonderful script. Our Head of Production, Bill Snyder, assured me that we could get a “highly trained elephant”…. and we’ll be able to do the episode on schedule, and on budget. Sure!  I wanted to be certain to protect ourselves as best as possible and insisted that we get the most reliable director in our group. That would be Leo Penn.

I knew Leo could be counted on to deliver a great show and to deal with the many problems that were bound to come up.  Leo decided to bring his young son, to the location, as he thought the fun of this particular episode would be a highlight for the kid…”Sure, Leo, Sure”. Our casting director suggested Keenan Wynn to star opposite the elephant. Keenan was the perfect actor for this job. He was funny and comfortable enough “in his skin” not to mind being the supporting player to a circus act.  Leo called me every day, to say that rehearsals were going great and that everything would be fine.

I trusted Leo, but I decided to fly to Charlotte to see for myself. The thought of an elephant loose in downtown Charlotte made me very nervous. Well, Leo was right, and “Anna Mae” and Keenan got on wonderfully. As I recall, it was on this episode that Leo, Keenan and our guys were discussing a scene, and Leo mentioned that his son wanted to be an actor. “Sure Leo, everyone wants to be an actor,” Anna Mae nodded in agreement. Well, once again, Leo was right. His son is the much talented and acclaimed, Sean Penn. Check out this episode, and I think you’ll be amazed at how beautifully “livestock can be directed”.  It’s a special pleasure for me, as I have lived in Charlotte in recent years, and boy oh boy, has it changed!!!