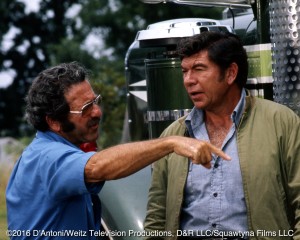 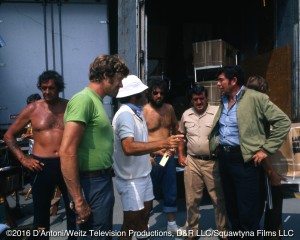 What do you do with a bomb, a ferry and a little help from Gary Sandy, WKRP’s Andy Travis? I don’t know, but Will and Sonny do. Watch them

float a trailer and blow it up in Chesapeake Bay.

When I look at “From Baltimore to Eternity” I see how nice it is when a plan comes together. This only occurs when a production is firing on all cylinders. In the case of “From Baltimore To Eternity”, writing, directing, acting, camera, special effects, locations, and stunts are all operating in high gear.

I recall saying to the writer of the episode, Jimmy Sangster, after he told me his plan for the script, “Did you just say we’re gonna drop a trailer off the back of a ferry and then blow it up? Have you’ve lost your #@$@# mind?” Our production team reassured me, “Don’t worry, we’ve got this covered.” I had a lot of faith in our superior crew…. so, OK, let’s do it…. And we did!!

Allen Reisner, our director, and one of the best to work on Movin’ On, was gunned-up for the grand finale and “all hands were on deck” to watch a car and then a trailer be pushed into Chesapeake Bay and blown to smithereens. Then, of course, came the arduous task of retrieval. When you look closely at the last stunt, the trailer going over, you’ll see a cable hanging off the back of it. That was used to haul the exploded remains back for salvage.

I’m sure you’ll also have fun watching Sonny “falling” for the female dentist as she berates him for his chauvinistic attitude and lack of fundamental education. Despite her put-downs, he just can’t resist her strength and independence. When Sonny suggests to Will that he needs to return to the dentist’s office because of “complications.” Will asks, “What does the complication, look like?” This is very funny line, one of my favorites across the entire series. I like the line because it’s funny – but also because it’s deeply revealing about the character. Sonny’s interest in the dentist shows him to be a complex individual, not at all the chauvinist the dentist thinks him to be.

The difference in formal education between Sonny and the dentist mirrors the same difference that exists between Will and Sonny. The fact that Will has a post graduate degree and Sonny never went to college was a “nice runner” (a running gag or story point) that Claude and Frank had a lot of fun improvising around. The characters like each other too well to insult one another, but that doesn’t stop them from some strong teasing.

Although the extemporaneous stuff usually worked great, sometimes the non-scripted bits that our guys were doing with one another actually got in the way. Claude and Frank were having way too much fun. They used the script in the loosest way, something to wave at as they sped by. The problem was that we were writing future episodes and we needed them to hit specific beats. Not only might they not hit a beat, they might add beats that then had to be dealt with in upcoming episodes! Finally, I asked our production people to put a “request” on the front of each script to not change dialogue unless previously approved by the production office…. ME. That helped…. a little. But because Claude and Frank knew their characters so well, and the audience really liked it when Sonny and Will got on a roll, a lot of that by-play made it into the final cut.

I’m still not crazy about our continuing use of the “poor man’s process” shots that are seen during the “over-the-hill and through-the-woods” chase scenes…. but all in all it works very nicely. There’s great production value to be seen in this episode. When you compare it to other series airing on other networks at the time, I think Movin’ On was head and shoulders above the crowd.

Have another look at “From Baltimore To Eternity” and I believe you will rate it right up there among our best efforts.

Watch From Baltimore To Eternity