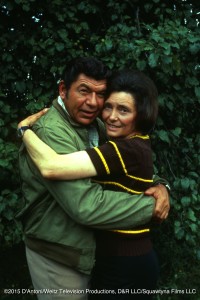 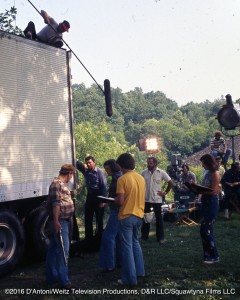 When the episode was written I gave the script to our casting director, Gary Schaeffer, for his thoughts regarding the female guest star… the role of a “cantankerous woman who owned a coal mine….in a small town in West Virginia”….Gary’s immediate thought was the Academy Award winning actress…Patricia Neal….I was dubious….First, I didn’t think Ms. Neal would be interested in going to Beckley, West Virginia to do a “guest role”, and second, I was concerned with the fact that she had had a stroke and might have some problems walking about the very rugged set…. an abandoned coal mine. Our talented location manager had found the perfect practical set.

Gary prevailed on me to meet with Patricia and make up my mind after the meeting. On the day of the meeting, I remember considering, how extraordinary, Patricia was in the film “Hud” opposite Paul Newman….a role which garnered her an Academy Award….When Gary brought her into my office to meet with the director, Cory Allen, my reaction was….She is such a beautiful woman….tall, stately….grand….How the heck will she be able to play a cantankerous owner of a coal mine?

We talked some about the role and I wondered aloud….if moving around on the set, over rocks and uneven surfaces would be OK for her….Patricia assured me that there would not be a problem….and lastly, I asked her about the Southern accent which the character required and if she had any idea about the “business of coal”…. Patricia stood up…. leaned over my desk…and in a deep Southern drawl, said… “Honey, my daddy used to manage a coal mine in Kentucky”….She was cast….immediately! And as she left the office, she turned and asked me with the sweetest Southern accent…. “is there any possibility that my daughter, Tessa, might have a role in the episode as well?”….Not A Problem!!!!

Once Patricia was cast, our casting director suggested Gary Merrill to star opposite her. Gary was perfect…. he was a wonderful actor, had been married to the legendary actress, Bette Davis, and would be comfortable with the enormous talents of Patricia Neal. The two of them got on famously….Patricia and Tessa were a joy….and Frank and Patricia chatted it up….continually….about the New York stage and doing theater in general.

My concern about her ability to maneuver about the set was immediately forgotten…when I saw her walking about the rugged set…with a large dog on a leash…. she thought…the dog…would add “more edge” to her character….A truly wonderful actress!!