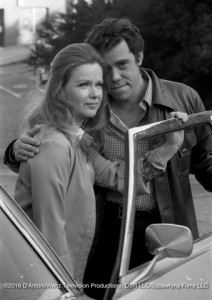 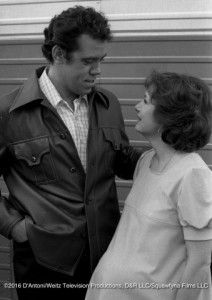 The subject is bigamy in the pre HBO, Big Love era. Sonny and Will discover that their pal, Teddy, John Schuck, has two wives and two families. Veteran actresses, Anne Francis (Forbidden Planet and Honey West) and Kelly Jean Peters are the deceived women. Lucky for everyone, our heroes are there to ease everyones pain.

It’s sometimes hard to shake loose memories…. especially good ones. I always thought the film, Captain’s Paradise, starring the remarkable actor, Alec Guinness, was great fun. The premise of the film is that Guinness, captain of a ferryboat, is a bigamist with women of differing appeal and temperament in each port of call. This idea stuck in my head for many years, and then came back when I was sitting with our writers trying to come up with a “fun” idea for a Movin’ On episode. Although I had last seen Captain’s Paradise some twenty-years earlier I pitched the idea to the team. The plot resonated with producer, Joe Gantman and the writing staff. Everyone realized that a long distance trucker would have similar possibilities presented to him…. Right?? Our writer, Eugene Price, delivered a wonderful script, and director Seymour Robbie was assigned to deliver this sensitive topic to the screen.

Casting had to be on the money, as the episode we were planning required a lot of complex emotions, and one that would likely get a good deal of differing audience reactions.  Well…. talk about memories. In 1955, I had seen another wonderful film, Blackboard Jungle, that starred Glenn Ford, Sidney Poitier, and the very sexy beauty, Anne Francis. I was in high school at the time and I didn’t recall the co-eds looking like that! Anyway, I knew Anne was doing TV and asked our casting director to bring her in for a meeting. Anne had the job the minute she walked in the door. Blonde, blue-eyed, voluptuous, a mole on the right side of lower lip, and a deep sultry voice…. Done. Now, to cast our male lead – the bigamist trucker. John Schuck was recommended and I recalled seeing him in another favorite film of mine, McCabe and Mrs. Miller, with Warren Beatty and Julie Christie. We knew John would be perfect and he agreed to take the part. We were on a roll so decided to reach out to another wonderful film actress, Kelly Jean Peters, who we happily were able to land. Kelly Jean Peters had worked with Dustin Hoffman in Little Big Man. Now we were ready to go.

When you look at this episode, please keep in mind what you should recall I’ve stressed in earlier stories. In year one of Movin’ On we were able to present much more delicate and complex material. In “The Price Of Loving”, as well as in other adult themed episodes, our actors eagerly leaped to the task. You’ll also note that our director, Seymour Robbie, was able to touch on this very sensitive, subtle situation with a delicate, heart-felt hand. I like to think we were ahead of our time. I don’t recall other programs of the era touching on subjects like ours at all. It was a job well done all around.

The Price Of Loving Photo Gallery

Watch The Price Of Loving