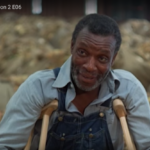 In “To Be In Carolina”, Sonny and Will first burn down Otis Andrews’ barn and contribute to breaking his leg. Then, they go about helping Otis and his family, a tobacco farmer whose son is mixed up with cigarette smugglers. Otis is played by Moses Gunn, a well know actor with an extensive resume in TV and movies. His daughter is played by Lauren Jones and his son by David Downing. Both also have long lists of TV and movie credits.

After the fire is out and the broken leg treated, Sonny and Will help out by; picking tobacco, get 20 or so trucker buddies to pick tobacco by cooking them a soul food meal, reconcile father and son, and bust the smugglers. Not bad for a couple of days work. 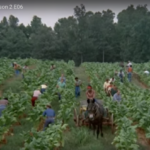 In my early days as an agent I booked music acts in the South. I remember driving Carolina country roads watching tobacco being picked. I heard workers singing as they moved laboriously through the fields followed by mules pulling wagons piled high with picked tobacco leaves. I felt transported to another time and those images stuck in my head. Years later I had the opportunity to revisit that time and place with our episode of…. as the song goes, “To Be In Carolina… in the morning.”

We liked the work of the husband and wife writing team of Gwen Bagni and Paul Dobov and brought them in for a meeting to hear their ideas. As I recall, they brought the kernel of this story to us and then Ernie Frankel, Jimmy Sangster, and yours truly rounded it off. For some reason, father and son conflict is a recurring theme through a number of Movin’ On episodes and it’s in evidence here. Moses Gunn, who I had known from his New York theater days, plays the father. David Downing plays his son. Moses could do more with a simple look or gesture than many actors could with a lengthy monologue. Moses was enthusiastically recommended by our director, Michael Shultz. Michael’s agent heard that we were developing a script about an African-American tobacco farmer who gets injured and must marshal his forces to bring in the crop. The fact that we were going to shoot the episode in North Carolina’s tobacco growing region had many directors knocking on our door, but I promised to give Michael a “first look”. A remarkably talented director and African-American to boot made the marriage of actors and director a lovely plus. 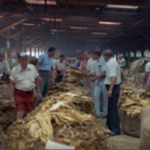 In this episode you’ll see real tobacco fields and a real tobacco auction featuring a real auctioneer, chanting as he does when doing his actual job, selling tobacco leaves to the highest bidder. All this is played out in the background of one of the final scenes in a huge tobacco warehouse.

Once again, an enormous “atta boy” to our location director for finding a magnificent place to shoot this terrific episode. You’re gonna get a tickle when you see Will and Sonny “pickin’ tabaccy”, and even more when you watch them cookin’ “Soul Food”…. collard greens, corn bread, and pulled pork…. which is the enticement to get a bunch of truckers to help bring in the crop. Converse and Lauren Jones, who plays Gunn’s daughter, have a couple of very sweet scenes that make me pleased to see what Movin’ On was accomplishing. Please watch “To Be In Carolina” and let us know what you think. 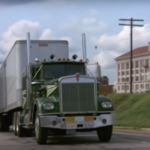 Watch To Be In Carolina