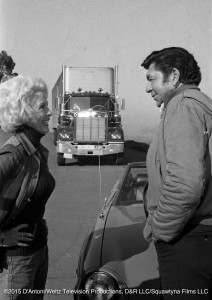 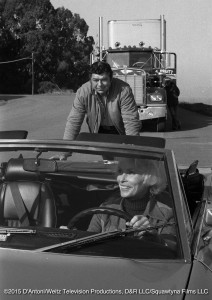 Sonny falls for damsel in distress, Janet Leigh – who wouldn’t? She’s a bohemian artist living on a houseboat. Sonny goes Picasso and gets a marriage license.

Movin’ On was doing very well in the ratings – NBC wanted more, and more, and more from our creative group…. Sitting at a story meeting, throwing around ideas for an episode…. someone said…”Wouldn’t it be interesting to create a love story for Sonny?” Sure… It made sense…. Both “Sonny” and “Will”…received many letters from our large female audience. Those notes were sent to NBC and our offices and often proclaimed adoration for Claude and Frank’s respective talents… George Kirgo, the writer for this particular episode, came up with the idea of “Wedding Bells”.

You may remember how the story goes. Our boys would come across a beautiful woman stranded on the side of the road…. with a broken down sports car….Sonny falls in love with the “damsel in distress” and they contemplate marriage. Sounds cool! As an aside, our director Michael O’Herlihy…. a very proud Irishman, wanted the “broken down” auto to be an English sports car. We used a Jensen-Healy Roadster. Michael found that hilarious.

Our casting director, Lou Di Giamo, suggested the wonderful actress… Janet Leigh…. She had received an Academy Award nomination for her “never to be forgotten” role in ‘Psycho’, co-starred in ‘The Manchurian Candidate’ with Frank Sinatra, and so much more. Yes, yes, yes – by all means – let’s get our script to Janet… Well, well, Janet loved it… wanted to do it…. the fact that the episode was being filmed in Sausalito, California… a short hop, skip, and a jump from where she was brought up… in Merced, California…. made it all the more pleasing.

When Janet arrived for a meeting with O’Herlihy and Kirgo…our entire office was taken with her beauty…. we talked about her thoughts regarding the script, and her role in general…. And as the meeting came to an end, Janet asked if it would be OK if she brought her teenage daughter to location… as she was thinking about a career in acting… Sure, bring the kid along…. We like to have family around the set!!

I remember talking with Janet’s daughter while Claude and Janet rehearsed. She asked if I was from The Bronx (one of the five boroughs of NYC). I wondered how she knew, and she said…”Because that’s where my Dad was brought up… and you both have the same, funny Bronx Accent” – which she mimicked to perfection!! We laughed a lot…. She was a delight and Frank was particularly attentive, discussing the pros and cons of an acting career…TV, Film, Stage… all the possibilities, which often require a different set of skills. But then, Janet’s daughter knew all of that. After all, her father was Academy Award nominated actor Tony Curtis…. Janet and Tony’s daughter matured and become the lovely, much talented actress Jamie Lee Curtis…. So there you go…. All things were possible on the set of “Movin’ On”!!!