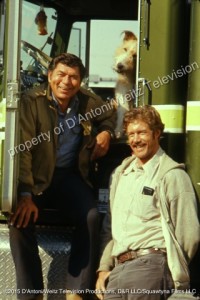 The hound is Shadrack.

Claude loved the dog!  Frank loved the dog!! I loved the dog!!! Yet, the director of our pilot, In Tandem, Bernie Kowalski knew the dog was going to be trouble one day. He warned me….. “Livestock can’t be directed, Barry”. It was only a matter of time….. Shadrack would take up way too much production time, actor time, script supervisor time…. and general well being….. way, way too much time to be worth it. Bernie was right. I remember Claude taking me aside and saying, “Thanks, Barry, Frank is a great co-star, but I don’t think I can handle the dog as another “co-lead”. That’s when Shadrack was gone. The idea of Shadrack was better than the reality of Shadrack.

By the by, one of the reasons we selected Bernie to direct the pilot was that he had done “N.Y.P.D”, a series that starred Frank as a New York City policeman. I thought that Akins, Converse, and Kowalski would get on nicely. They did and the pilot was a big success, which allowed us to make the series, “Movin’ On”…. which makes us all smile!!

The photo is of Shadrack on his best behavior.