Barry’s Emotional Visit To The Movin’ On Museum

Barry visited The Movin’ On Museum that Bill Bazen opened recently. The Museum is located at 14917 Creedmore Rd. Wake Forest, NC 27587. It is open Saturdays from 12 pm to 3 pm and Monday – Friday by appointment. Sorry, we are closed Sunday. For appointments to visit the museum on a weekday please email MOVINONFAN@YAHOO.COM or call Bill at 919-282-2372 and leave a message. 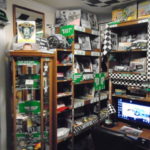 A look inside the Movin’ On Museum

The extensive collection of Movin’ On items at the museum left Barry a little dazed. On the phone to me later in the day, Barry had a difficult time describing the emotions he experienced meeting Bill and finally realizing how deeply Movin’ On, his creation, touched people. Claude Akins had once told Barry that his part as Sheriff Lobo was a job, done for a paycheck; his role as Sonny Pruitt was for love, he’d have done it for nothing! At the Museum, Barry saw a letter Claude had written repeating the same story.

Barry is used to actors saying things like that. He believed Claude completely, but after all, Claude was in show biz. At the Movin’ On Museum, and earlier in the week at The Great Southern Truck Show, Barry was hearing from people – regular people who had been touched by his program. It’s a unique experience for a Producer to be told things like, “What you did was what made me want to be a trucker,” and “Your show made me proud that my Daddy was a trucker.”

Barry was deeply affected by what he saw and heard in North Carolina. Describing it to me he used the words inspirational, touching, tickled. Barry spoke of getting a little “weepy” when he touched items that he hadn’t seen in over 40-years. 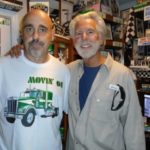 I don’t expect you will get weepy when you visit the museum. Maybe only the baby’s father feels that way. But, if Movin’ On reminds you of family, pride, and long ago good times, perhaps you will have to fight back one or two tears.