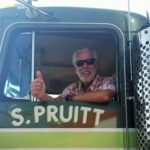 Barry Weitz is not a man who tears up. He also doesn’t let his emotions show. This week has been an exception. True, he did not tear up, but for the first time since we began collaborating, Barry’s emotions were evident. He expressed his gratitude to me for reviving Movin’ On. He was effusive in his thanks and appreciation.

What brought this on? Barry is, for the first time, understanding the deep meaning that Movin’ On has for people. Barry visited Brad Wike’s Southern Classic Truck Show in late September. The visit was an afterthought, a short road trip with his wife to fill a Saturday afternoon. Meredith and Chris of Freewheelin’ mentioned that the original Movin’ On Kenworth would be at the show. By chance, Barry was in Charlotte, forty minutes away from Brad’s farm so he went over with no expectations. What Barry found in Brad’s lush field, in addition to many amazing trucks, was his past. Barry also discovered that his past is tied to the people that he made Movin’ On for – but now has he met them face to face.

Barry arrived unannounced and asked for Brad. Understandably, Brad was busy and didn’t like the idea of going back to the entrance to speak to some unknown visitor. “There are two-hundred people that want to see me,” Brad explained to his assistant over the phone. “You’re going to want to see this one,” Brad’s assistant told him.

How right she was. Once Brad understood that the Creator of Movin’ On was standing before him he could not have been happier. He was looking upon a hero of his childhood. He was remembering his father on the roof of their home in 1974, twisting the antenna to pull in a better picture on their TV. It was 8pm Tuesday night – Movin’ On was starting.

Barry wanted to see the Kenworth. But first Brad had to introduce Barry to another of the Movin’ On faithful, Robb Mariani. Robb is the Executive Producer of American Trucker and was attending the show with his Cobra rig. On Robb’s website, Movin’ On is listed as one of his all-time favorite trucker movies, TV shows, and songs. Brad knew Robb would be as thrilled as he was to meet the man who had propelled trucking into the pop culture 40-years ago.

Robb explained to Barry how important Movin’ On had been to him. It’s why he got into trucking. 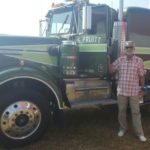 Finally it was time to see the big green truck. I imagine Barry must have forced back a tear or two as he gazed on the truck, climbed on board, and sat behind the wheel. The look of joy on his face, looking out through the S. Pruitt side window says it all. The big grin and thumbs up are there to hide the deeper happiness.

The rest of the day Barry was told how important Movin’ On was to people. Every one wanted to thank him and tell how the show impacted their lives. Sure, Barry enjoyed seeing the truck after forty-years, but what really stuck with him were the fans. For the very first time Barry understood how what he had created affected people. They aren’t just an audience anymore. They are not percentages on a Neilson rating. They are people who appreciate what Barry and his team did. They are grateful and after many, many years they were able to express their thanks to the man who did so much for them.