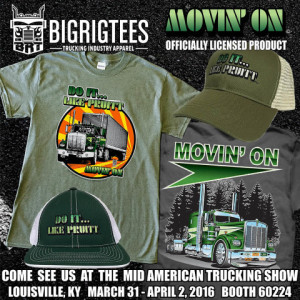 MATS, is the largest annual heavy-duty trucking industry event in the world. The show attracts over 1,000 exhibitors from around the world and 70,000 visitors to Louisville, KY for the three-day party from March 31 – April 2. Big Rig Tees will be selling several styles of Movin’ On shirts and hats from their own booth #60224.

Everything I have heard about MATS sounds great. I’m not a trucker. I’ve never been involved in their world. But since reviving Movin’ On, I have been paying close attention. Through the Movin’ On Facebook page I have met some wonderful people. They are either truckers or family of truckers and they form a very close-knit community. They care about each other and they go out of their way to help one another, not unlike Sonny and Will. They also care deeply, about all things truck related.

I know they’re passionate because I see their love for Movin’ On, a forty-year old television show. At first it amazed me, but after watching the episodes more closely, I do understand. The shows stars, Claude Akins and Frank Converse really captured the spirit of truckers. And of course there is the un-credited third star, a big green Kenworth. But the truth is that outside of their own community, truckers get very little recognition. Us four-wheelers don’t think about the good that truckers do every day. We don’t see the risks and hard work and service to our country. That’s why they stick together and when a TV show or movie represents them in a positive way, they take it into their hearts and hold it tight forever.

Pride in truckers and in Movin’ On

I’m very happy that I can give something back that pleases truckers. That’s how I feel about the work I’ve done restoring Movin’ On and getting it out in the world to be seen again. I’m proud to wear Movin’ On tee shirts and hats and I hope the fans appreciate them as much as I appreciate all the truckers.

I wish I could be at MATS handing out the shirts myself but I feel good about our partners at Big Rig Tees. They have been serving the trucking community for years. I’m still new to the game. But hey, maybe I’ll see you there in 2017.