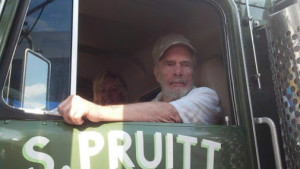 Merle Haggard and his guys came down from Bakersfield, CA to meet with me at the Movin’ On offices at the MGM Studios. We had put together a screening room…. with big, lush, soft cushioned sofas and a great sound system so Merle could sit comfortably and “absorb” our pilot, In Tandem. Our editors, appropriately, had refreshments sent in and Merle and his crew indulged in the libations set before them.

As I recall, it was early afternoon and we planned to take Merle to lunch at the MGM commissary once the screening had concluded. I sat beside Merle in that dimly lit screening room before the movie began and wondered if Merle would find In Tandem exciting enough to write and perform the title song. Our Head of Production, Bill Snyder, chatted it up with Merle while I sat quietly by…. hoping for a good reaction. I know I was nervous because I don’t normally sit quietly by. I remember thinking, “Maybe I shouldn’t have caught so many bass!!!” But what the hell, it’s about the film after all. Either In Tandem speaks to Merle or it doesn’t.

Well, In Tandem did speak to him! Merle and his guys laughed at all the right places and were absorbed in the drama of the movie. They were with it! My secretary quietly came in…. while the film was rolling. She whispered in my ear that I had a call from Larry White, the Head of Production for NBC-TV…. and could I take the call? Well, it’s not smart to refuse a network head’s phone call. I told my secretary to put the call through. The phone was on a small table between Merle and my seats. Also on the table was an intercom to call the projection booth and controls for the lights. I fumbled a little trying my best to not to break Merle’s concentration. I certainly didn’t want to turn on the lights!

I managed to pick up the telephone and talked to Larry in a hushed voice about my plans for the series. When I told him that Merle Haggard was sitting next to me watching the pilot as we spoke, Larry said, “Merle Haggard, No Way!! Do you really think he would do the title song”?

“Yeah, I think he will, but I’ll let you know later, when he’s done watching the pilot.”

“Damn Barry, that would be great if you could get him.”

When the lights came up, Merle and crew applauded enthusiastically and Merle announced without hesitation, “I’m in.”

We went to lunch at the MGM commissary as planned. Keep in mind; the MGM commissary was the place…. all the stars that were working on the lot would dine there.  We had made a reservation for the big table at the back of the vast room and when we entered the Maître d’ immediately recognized Merle, as did many others. Many actors, directors, producers came up to him to shake Merle’s hand and acknowledge his enormous talents. A sprinkling of spontaneous applause broke out and Merle was a tad embarrassed…. but was gracious to all that wanted autographs and a handshake.

As you know, Merle did write and record our title song. That song helped put Movin’ On in the world of an iconic truckin’ show…. a world we will always share with Merle…. an icon of the Country and Western world. It was an experience I will never forget. Thanks, Hag…. R.I.P.