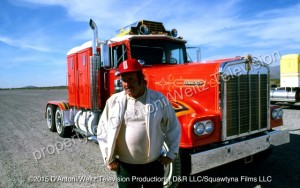 Tyrone “Jerry” Malone and “The Boss”, his double sleeper Kenworth 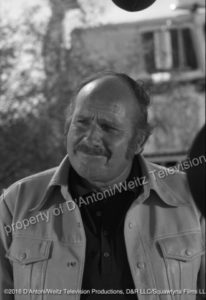 My first impression of Jerry Malone was actually an impression of his big-rig. I later found out it had a name, “The Boss”. It was a beautiful truck and everyone on our crew, including the usually jaded teamsters, was very impressed. Even cooler than Malone’s truck was the fact that he loved our truck too. He couldn’t stop talking about how much he loved the colors and the graphic arrow design.

Jerry was quite a character. Obviously, he was enthusiastic about trucks and he was like a kid in a candy shop around all the rigs we had assembled for the “Christmas Race”. He was also very knowledgeable and helped us a lot when it came time to stage the race. He worked very closely with our stunt team and also advised our camera department how best to capture the action. 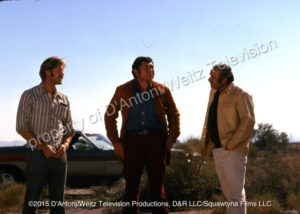 Tyrone “Jerry” Malone with Sonny and Will

There was never any doubt that Jerry would drive his truck in the race, but what I came to realize very quickly was that Jerry needed to be a character in the episode so I instructed the writers to expand the part of the race favorite who goads Will into entering the race. Jerry was a natural. He plays it smug and aloof, with just the right amount of condescending bullying — exactly the opposite of the real Jerry Malone.

Jerry was a perfect fit for Movin’ On: whether in front of the camera, behind the scenes, on his feet, or behind the wheel.

For more about Tyrone Malone visit this excellent website – tyronemalone.net